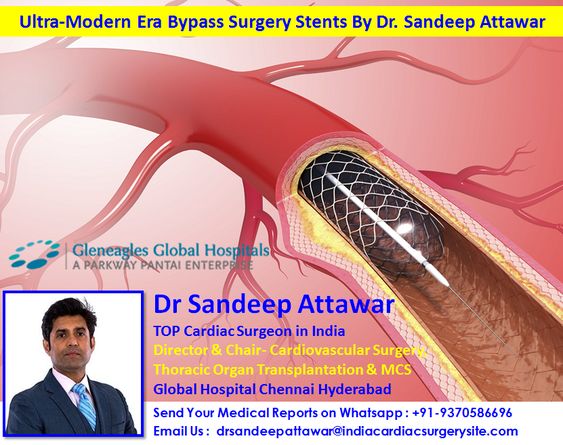 The approach for inserting a stent—known as percutaneous coronary intervention, or PCI—however, calls for a much shorter medical institution stay than traditional open-coronary heart pass surgery,with faster healing times, and is lots less likely to trigger strokes.Though stents are much less risky for sufferers within the first month or so after the technique, they're more risky—with a much chance of heart assault and death—in the years following.

These observations stem from research of older-technology stents, says best cardiac surgeon global Dr. Sandeep Attawar, who points out that more recent stents are designed to be better matched with living tissue and less possibly to cause clots, infection, and tissue growth.

Dr. Sandeep Attawar compared some of the newer-generation stents to bypass surgical procedure.It’s found that stents lined with the drug everolimus, an inhibitor of irritation and tissue boom, didn’t cause greater longer-term mortality than bypass surgical operation. Best cardiac surgeon global says that the findings about similar mortality must make it simpler for “patients and their physicians to choose more accurately among stents and bypass surgery.”

The analysis ought to make it less difficult for “patients and their physicians to choose more accurately between stents and bypass surgery," says Dr. Sandeep Attawar Best cardiac surgeon global. It compared effects of patients who had bypass surgical operation with folks that had everolimus-covered stents implanted.The stent group, as predicted, fared better within the first 30 days with lower risk of demise and stroke, but in evaluation to in advance research of older stents, the stent institution didn’t fare worse in the longer term for death.Ultimately, the numbers of deaths within the two groups were not significantly different.Patient in the stent group had about 50 percent more heart assaults during in comparison to the bypass group, but for the ones patients whose stents effectively opened all of their diseased arteries, there was no enormous increase in coronary heart attack.

Even though this latest study does not settle the query definitively because it's based on observational data not on the gold standard of a double-blind medical trial, Dr. Sandeep Attawar best cardiac surgeon global says “the decision between stenting and bypass surgical should be based on weighing the up-front risk of death of life and stroke with bypass surgery, with the long term need for repeat procedures with stenting.”